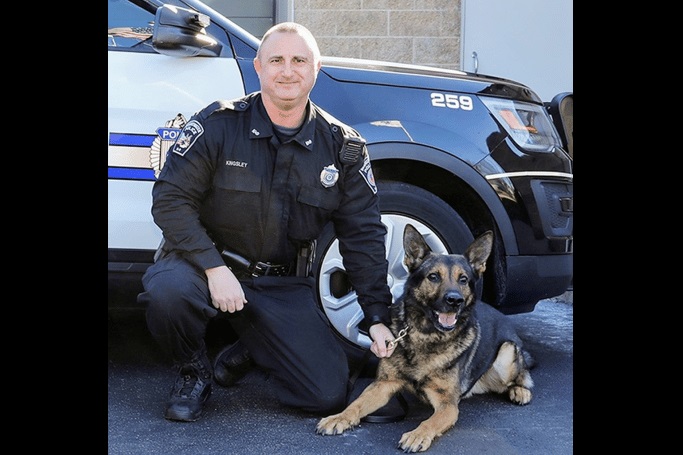 Papi was a 9-year-old German Shepherd from Slovakia. He joined the department and was partnered with K-9 Sgt. Steven Kingsley in 2014. The team completed Basic Canine Patrol School the same year and completed cross-training in drug detection in 2016.

Papi was involved in many tracks of missing people and suspects, building searches, armed incidents and violent encounters, searches resulting in the seizure of drugs, and more. K-9 Papi and Sgt. Kingsley were assigned to the W.E.B. Major Crimes and Drug Task Force and the Southeastern Massachusetts Law Enforcement Council SWAT team.

He also participated in many public events and educational demonstrations, including Autumnfest, the Bridgewater Police Citizens Police Academy, the Parks and Recreation Department’s summer camp, Mollie’s Vest-a-Dog events, and more.

Papi suddenly became ill on Sunday, June 19. He underwent emergency surgery but did not survive.

An honor service was held on Monday, June 20, at Angel View Cemetery in Middleborough, which was attended by members of the Bridgewater Police Department, other area K-9 teams and law enforcement officers from the region.

“Sgt. Kingsley and K-9 Papi were an outstanding team whose work — some of which was well-known and some less publicized — was instrumental to many searches and investigations that contributed to the safety of our community,” Chief Delmonte said. “Papi was a protector of the officers he worked with and valued presence at the many community events where he represented the department. He will be greatly missed by Sgt. Kingsley, his family and the department.”