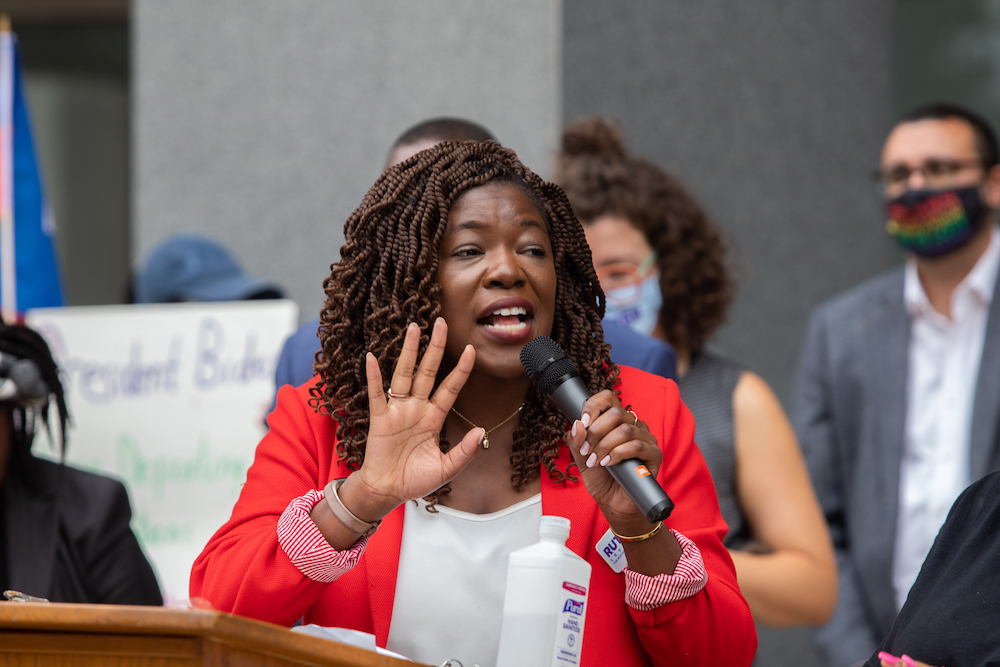 In the wake of controversial images showing U.S. agents on horseback chasing Haitian migrants at the country’s border with Mexico, politicians in Massachusetts and Boston are criticizing the Biden administration’s immigration policies and treatment of those trying to enter the U.S.

Elected officials from across the political hierarchy in Boston gathered outside the JFK Federal Building in Government Center Friday to decry what they said was the inhumane treatment of Haitians at the Texas-Mexico border, call for an end to deportations, and protest the Biden’s administration “violent treatment” of Haitians.

“We are supposed to be a land that welcomes immigrants, but yet we are turning them away every chance that we get. And we are supposed to be a country that celebrates our diversity, but yet we allow anti-Blackness to cloud our policy, and in this instance our immigration policy,” said Boston City Council at-Large candidate Ruthzee Louijeune, a Democrat. “Whether under the Trump administration or under the Biden administration, this country has said loudly: Haitians we don’t want you here.”

Images circulated earlier this week showing horse-mounted Border Patrol agents attempting to apprehend migrants and using their horses to direct them back toward the border.

Those pictures have sparked outcries across the nation including here in Massachusetts where a group of Boston elected officials denounced the acts as “reprehensible” and called for the firing of the agents on horseback in a letter posted to social media and sent to news outlets.

The authors of the letter and the local advocates who organized the rally are asking federal officials to stop deporting Haitian migrants, saying the country is facing a number of challenges stemming from a surge in COVID-19 cases, a powerful earthquake in August, and the assassination of the country’s president in July.

“The knee-jerk reaction to deport Haitian immigrants who are leaving a country in the midst of political turmoil, a devastating earthquake and hurricane, and a global pandemic is rooted in systemic racism and anti-Blackness,” the letter said. “The rest of the Massachusetts federal delegation should do their part in calling for the Biden Administration to halt these deportations, recognize Haitian immigrants’ legal status, and hold those responsible for inhumane treatment accountable for their actions.”

The situation at the border and the images were cited in the resignation letter of the United States’ special envoy to Haiti, Daniel Foote, who stepped down from his post Thursday, the Washington Post reported. Foote was appointed special envoy in July after the assassination of the country’s president.

While the White House has previously defended the administration’s policy for deporting Haitian migrants, President Joe Biden said Friday that the scenes from the southern border are “outrageous,” according to The Hill.

“To see people treated like they did, horses barely running them over and people being strapped. It was outrageous. I promise those people will pay,” the president said, according to The Hill. Biden was also asked if he took responsibility for the situation, which he said he did, the media outlet reported.

The Department of Homeland Security announced this week that it will investigate the treatment of the migrants on the Texas-Mexico border as a result of the images, and Biden on Friday said “there will be consequences.”

At Friday’s rally, Fluker Oakley, who represents a large population of Haitians in Boston, said the Biden administration “must do better” and grant temporary protected status to all Haitians seeking asylum.

“Whether it’s Haitians who most recently are trying to escape the political turmoil after the assassination of the president, the hurricane and the earthquake, or Haitians who left after 2010 and were living in Latin America and South America, the fact remains the same: to send them back to a country that is in political turmoil and disarray is disrespectful and we will not stand for it,” the Mattapan Democrat said.

The Biden administration must “end inhumane treatment and deportation of Haitians immediately,” said Miranda, adding that everyone has a right to the United States’ asylum process.

“What happened to treating migrants with compassion and dignity? What happened to your path to citizenship? What happened, Sir Biden?” Miranda said at the rally. “We must be honest with ourselves as a country, that the United States has caused harm to Haiti and it’s time to do what is right, what is just, and what is moral.”

Rep. Mike Connolly of Cambridge said Haitians crossing the border into the United States are “entitled” to temporary protected status.

“I’m afraid the only thing that is complicating this for some people in this country is white supremacy, is issues like racism. We have to see the humanity and we have to grant temporary protected status,” he said. “And you know, we endured four years of Donald Trump, we elected Joe Biden, we deserve better and these humans deserve better.”