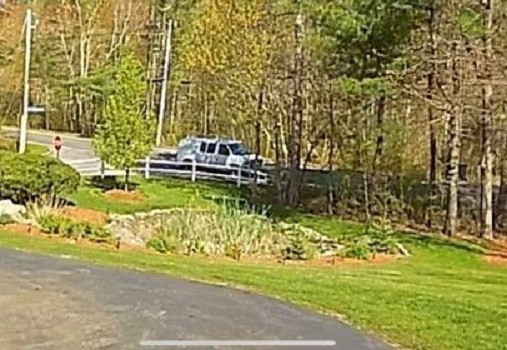 HANSON — Chief Michael Miksch reports that the Hanson Police Department is investigating a report that a suspicious man approached children this morning and asked them to get inside his vehicle.

At approximately 9:50 a.m. Saturday, Hanson Police units were dispatched to the area of 500 Whitman St., where a caller reported that his son and friend (under the age of 12) were approached by a white man with a short buzz-cut haircut and glasses believed to be between the age of 35-40 years old.

The man allegedly asked the children if they wanted any toys. The children stated no, and then the man told one of the kids to “just get in” to his van. Both children fled the area and returned to their residences to inform a parent.

Hanson units checked the area and found video feed from a neighboring resident. The video feed shows a white work van, possibly a Ford E-Series E-250 cargo van with roof racks and running boards. The children involved stated the van had rust and writing on the back, but were unable to recall what the writing was. The van made two passes by the children and on the second pass the man interacted with them.

The video feed shows that the van remained in the area for a minute or two before interacting with the children and then left the area heading towards East Washington Street.

Hanson units checked the area and a BOLO was sent out.

Anyone with information about this incident, the vehicle or driver — particularly residents of the Whitman Street area — are asked to call the Hanson Police Department at 781-293-4625.