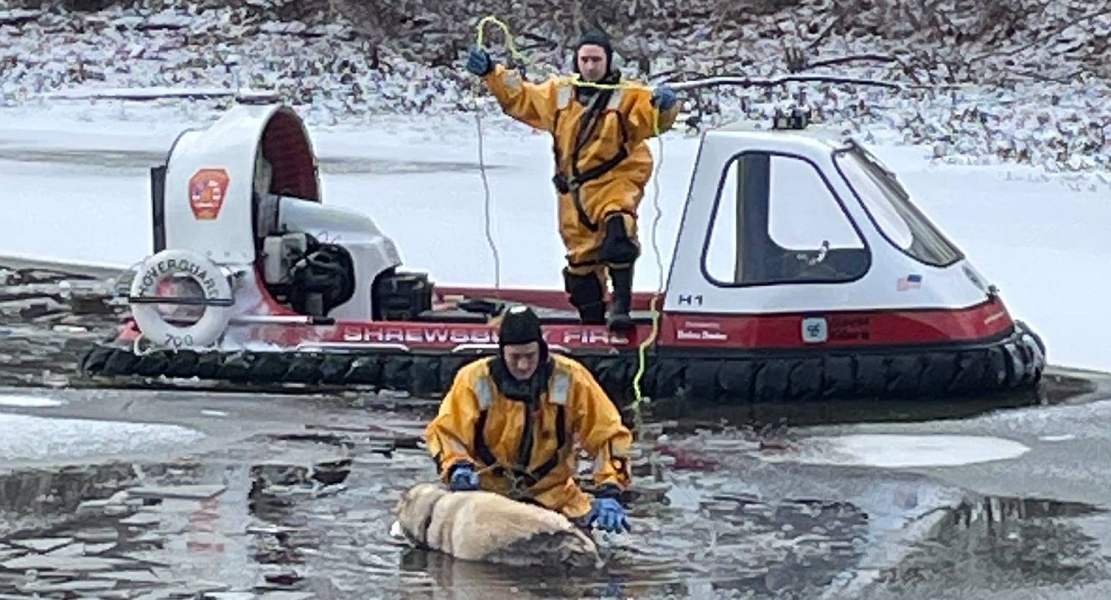 SHREWSBURY — Captain Frank Ludovico reports that the Shrewsbury Fire Department rescued a dog that had fallen through the ice on Flint Pond this morning.

Shortly after 9:20 a.m., Shrewsbury Fire was dispatched to Flint Pond for a report of a dog that had fallen through the ice. A firefighter in a rescue suit with a line attached first attempted to help the dog, Rocky, but was unable to due to the amount of sand and silt at the bottom of the pond. Two firefighters then used the department’s hovercraft to get closer to the dog. One firefighter was able to reach the dog and bring it back to the hovercraft.

Rocky was safely reunited with their owner at the nearby boat ramp.

“The owner did the right thing by calling us to rescue the dog rather than trying to rescue the dog themselves,” Chief James Vuona said. “During the winter months, temperatures can fluctuate and cause the ice to weaken, so it’s important that residents do not attempt to walk out on any, regardless of the depth of water. Thank you to everyone involved with today’s rescue and for their skilled, thoughtful work to safely reunite the dog and the owner. This incident showed how critically important the Hovercraft is during the winter months when the ice is very thin. I credit our firefighters for continually training with the equipment and on Ice and Water Rescue Techniques”