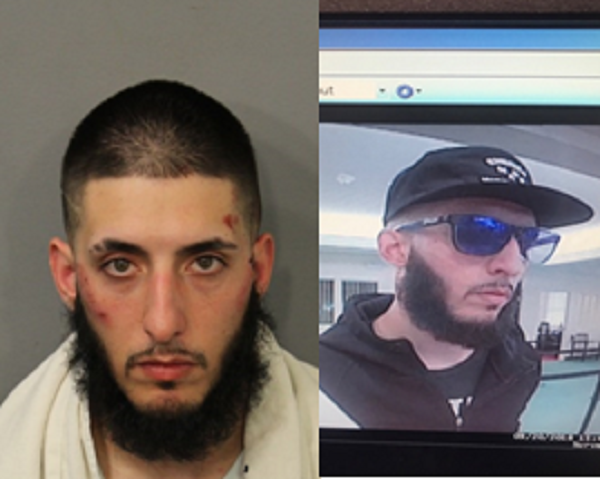 The Fall River Police Department have arrested a suspect in a Thursday bank robbery in the city.

According to Detective John Robinson, on September 20th at approximately 03:50 p.m., Officers of the Fall River Police Departments Uniform Division responded to Saint Anne’s Credit Union, 2031 South Main Street, on a report of an unarmed robbery.

Upon arrival, Officer William Pavao was informed that a male had entered the bank and approached the counter. The suspect unfolded a note and handed it to a teller. The note directed the teller to give him all of the big bills. Upon receiving the cash, the suspect, described as a white male with a bushy beard, wearing a black ball cap, a black hooded sweatshirt, sunglasses, and jeans, fled from the bank headed north.

Officers canvassed the area. During that canvass, Officers Frederick Mello and Jonathan Estrella located a witness who observed the suspect running by. The witnesses identified the suspect as a kid he knew from the neighborhood named Kalvin. The witness went on to say the suspect ran by without saying hi. Officers Estrella and Mello performed a social media search and located a Kalvin Boule with a picture. A surveillance photo was obtained from the Saint Anne’s Credit Union Surveillance system for comparison and found to be a match.

Officers Estrella and Mello went to St. Anne’s Credit Union and presented their findings to lead Detective Dwaine Cabeceiras and Officer Pavao. Past addresses were checked and that revealed that Boule was the male in the surveillance photo and had just left a King Phillip Street address on foot heading for an appointment in the north end.

Local taxicab services were checked and one was found to have picked up a male on South Main Street heading for South Coast Marketplace on Canning Boulevard.

Officers were dispatched to SouthCoast Marketplace and on their arrival observed a taxi with a lone male occupant. As the officers approached, the male fled the cab but was quickly captured by Officers Guy Furtado, Daniel Mello, and State Trooper Brian Kilfoyle.

Boule, 25, of 184 Globe Street Fall River was taken into custody and charged with Unarmed Robbery.