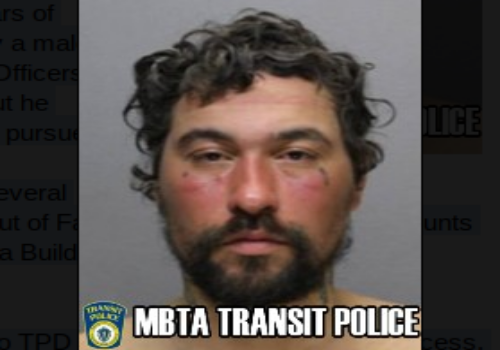 A Fall River man was arrested at South Station Monday.

According to MBTA Transit Police, at approximately 5:40 p.m., Transit Police officers assigned to the Central District were on patrol at the MBTA’s South Station when they were alerted to an unknown disturbance in the food court area of the Commuter Rail lobby.

Upon arrival, officers observed two males engaged in a verbal argument and immediately intervened. Officers ascertained through witness statements the following: A male victim, 54 years of age, was struck in the face with a closed fist by a male later identified as David Fink, 33, of Fall River. Officers observed the victim sustained a cut to his lip but he refused medical assistance and did not wish to pursue charges.

Subsequently, officers discovered there were several warrants in existence for Fink’s arrest issued out of Fall River District Court for 3 counts of Threats to Commit a Crime and Vandalizing a Building.

Fink was placed into custody and transported to TPD HQ for the arrest booking process.