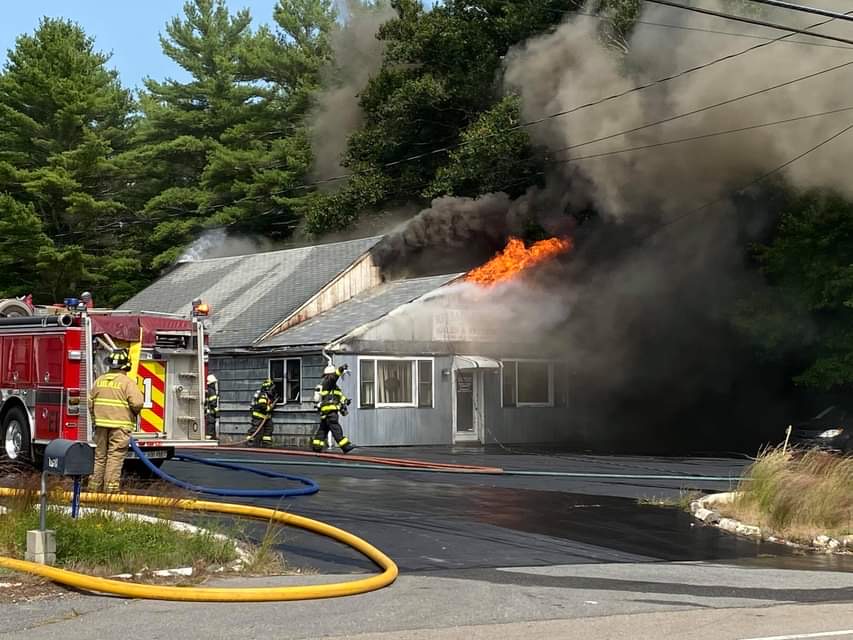 RAYNHAM — Chief Bryan LaCivita reports that the Raynham Fire Department responded to a 2-alarm fire at a commercial building on Route 44 Monday.

At 12:55 p.m., Raynham Fire responded to Reliable Auto Sales & Repair, 1708 New State Highway (Route 44), for a report of a fire. Upon arrival, firefighters found heavy smoke and flames coming from the back of the building.

A second alarm was immediately struck and fire departments from Taunton, Lakeville, Middleborough and Bridgewater responded to the scene to provide mutual aid. Members of the Easton Fire Department responded to provide station coverage.

The Raynham Police Department responded to the scene to close the area of Route 44 and Richmond Street. The road is now open.

According to RFD, firefighters were able to extinguish the flames and have the fire under control by approximately 3:30 p.m. The scene was cleared at 4:45 p.m.

No one was inside the building at the time of the fire and the business is not currently in operation, according to RFD. No firefighters were injured in the fire.

The building sustained extensive fire, smoke and water damage. Chief LaCivita estimates that about $800,000 worth of damage was done. The building will not be usable for the time being.

The cause of the fire is currently under investigation by the State Fire Marshal’s Office and the Raynham Police and Fire Departments.

“I would like to thank all responding personnel for their assistance, including an off-duty Plymouth firefighter and Volkswagen employee who assisted at the fire hydrant,” Chief LaCivita said. “It was a team effort from all sides that helped to control and extinguish the fire.”